Having an ODDBODS day out in Bournemouth

Last week we were invited to spend the day in Bournemouth with the ODDBODS and National Express. Olly’s a big fan of the children’s television programme the ODDBODS, and if you’ve not heard of them before, they’re seven little ‘odd’ characters who are all friends with their own quirks and different personalities; there’s Bubbles, Fuse, Pogo, Zee, Slick, Jeff and Newt, all who children can relate to having their own differences and oddities.

The ODDBODS can not only be found on CITV, Cartoon Network, Nickelodeon, Netflix and Amazon Prime but now they’re available to watch on board National Express’s fleet of core coaches nationwide. Using the the free downloadable app, VUER is National Express’s free digital entertainment service. On board a coach, you can login to their free WiFi, sign into the app and then stream hours of content. There’s movies, TV shows, news and magazines as well as over 200 hours of ODDBODS content to watch making day trips out with the family much more enjoyable.

We met up with children’s television presenter, Nigel Clarke who told us all about the app and introduced us to Bubbles and Pogo who were a massive hit with my boys.

To try out the app, we jumped on board a specially designed National Express coach and enjoyed a little tour of Bournemouth and Sandbanks whilst Olly enjoyed several episodes of the ODDBODS on the tablet. The app was brilliant and streamed the content perfectly. It’s a great way to keep the children entertained on coach journeys!

After the coach trip, we were invited to enjoy some of the attractions that Bournemouth has to offer. We had tickets for Crazy Golf which Olly absolutely loved. He played the 18 hole course with Shilts as Freddie snoozed.

We were also given tickets for the Bournemouth Big Wheel but Olly was having none of it as it looked too high. I’ll admit, I was a little pleased he decided he didn’t want to go on it as it stands over 100 foot tall and I’m not the best with heights.
Imagine my horror when I asked him if he’d like to go on it later in the day, for him to agree and reluctantly go on with me. My mantra whilst climbing aboard a swinging carriage of the big wheel was to show no fear. If I was calm he’d be calm too! I didn’t expect it to be be so windy up there and feeling the carriage swing in the wind isn’t something I want to repeat again. The views were spectacular though and we could see for miles across to the Isle of Wight and inland across Bournemouth. I was glad to get off although feeling rather triumphant that we did it!

In the afternoon, we were invited to Key West at the end of Bournemouth pier to enjoy some refreshments and take part in an ODDBODS inspired craft session. Olly loved this and got to make a ODDBODS headband, decorate a pencil case and make himself a beaded tag with his name on it. It was great fun!

We were then left to enjoy the rest of the sunshine so we collected our swim gear from the car and spent a couple of hours on the beach. Olly and Shilts went in the waves and Freddie and I watched from the beach, the brave souls whizz past us on Pier Zip, a zip wire that hangs over the sea!

It was a brilliant day, with beautiful weather and we had such a good time. If there’s one thing we’ve taken away from the event is how cute and quirky the ODDBODS are. There’s a little odd in everyone and it’s all about embracing your own differences and turning those quirks into positives. What a brilliant message for us all to remember this summer.
Disclosure: Thanks to ODDBODS and National Express for inviting us, we had a fantastic day out! 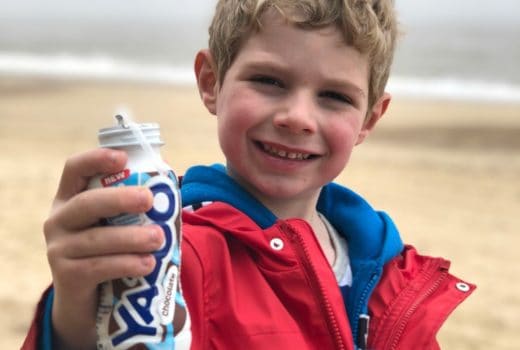