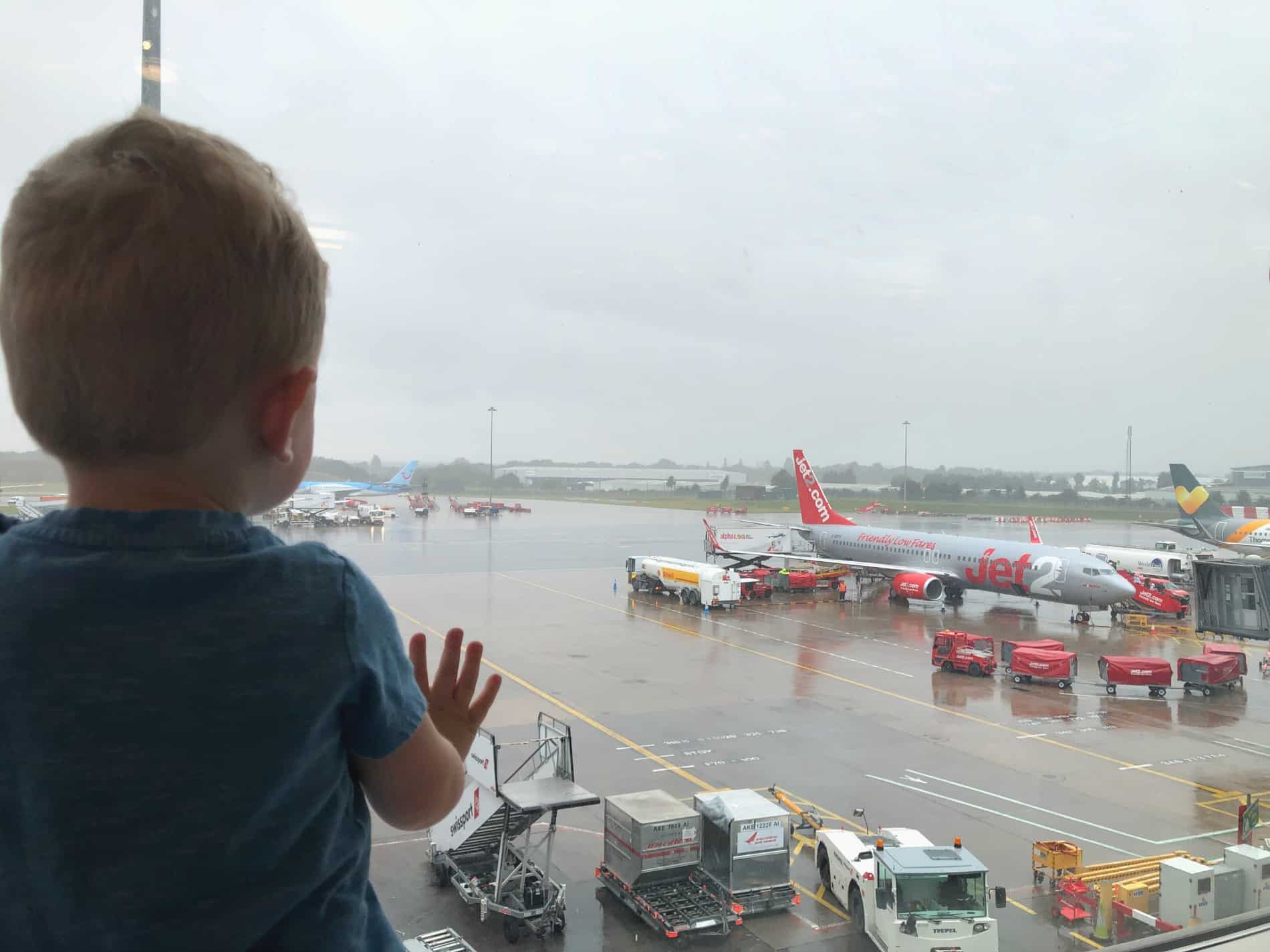 Flying with a toddler – useful hints and tips

We have recently returned from our family holiday to Gran Canaria and took both our boys aged 1 and 6 with us. We flew from Birmingham Airport to Las Palmas with Jet2 which took approximately 4.5 hours. As Freddie is just over 18 months old, he wasn’t allocated a seat and sat on me for both the outbound and return journeys. Here’s how I found flying with a toddler and some useful ideas you might want to consider too.

Flying from our local airport was the sensible choice for us. We could get flights direct to our holiday destination from Birmingham and knew we didn’t have to do any unnecessary travelling. We knew there would be quite a bit of walking around the airport so we took the stroller with us. Thankfully, Jet2 allow a stroller on the plane as an additional piece of luggage in the hold so we didn’t need to pay any additional fees for this.

Tip: Check your airlines luggage allowance when flying with children as you may be able to take extra equipment with you with no extra charge.

When it was safe to do so, we took Freddie out of his stroller and let him roam about. We didn’t want him to get too grumpy about having to sit on me and strapped in so gave him the most freedom we could do so safely. In Birmingham Airport there are children’s play zones at Gates 3 and 54 and by some sheer luck, we were boarding from Gate 56.

On the plane – take new activities

To keep Freddie occupied on the plane (despite the flight being right in the middle of his usual nap time, we knew he probably wouldn’t fall asleep) we took new activities for him to do. We wanted to give him something new that he hadn’t seen before and something that would keep his interest for at least ten minutes. I bought a colouring book and some new crayons, a Dinosaur sticker book, Farmyard Magic pictures pad (that you scratch off with a coin), Water Magic colouring book and a brilliant Crayola Mess Free Colouring Pages and Pens set of Paw Patrol which Freddie loves.

Tip: Take new activities that they’ve not seen before to keep them engaged and interested

Take ALL the snacks

My boys are so funny with their snacks, one minute they’re not hungry and the next they want to eat everything (including everything I attempt to eat). We took most of Freddie’s usual Kiddylicious snacks with us as we knew he would eat them and we bought some biscuits in the airport. We didn’t take any fruit with us as we didn’t want any wet mess whilst we were travelling but I know Freddie would have devoured this within minutes with it all down his front if we had let him.

Tip: Avoid messy snacks such as chocolate or fruit – toddlers won’t keep their hands to themselves

We took Freddie’s usual drinking bottle and filled it with water when we were airside. We also took a little bottle of Robinsons Squash’d (66ml) with us and used this to add to his water. This was also brilliant to use on holiday as the drinks available to children were limited in our resort.

Let them move about

No-one loves being cooped up on the plane especially toddlers who don’t really understand the concept of flying so when it was possible, we took the seatbelt off and let him roam about by our legs and in the aisle. We didn’t let him do it for long, it was just a chance to stretch his legs and then begin a new activity; eat a new snack, engage with him reading a story or watch a cartoon on the iPad.

Our flight outbound to Gran Canaria was full of wriggles, he didn’t sleep a wink and we used up all the snacks. Thankfully we changed his nappy during the flight and he saved us a dirty one for when we got to the hotel (although I have been there before with Olly and had to change a dirty nappy on the seat on the runway, nice!)

Our return flight was much later in the day and to my surprise Freddie fell asleep for an hour as we took off. He woke up during the flight and was interested in everything around him as usual but fell back to sleep for the last hour of the flight and I enjoyed watching the night lights of the Midlands. We landed in Birmingham with a sweaty, sleeping Freddie on my lap. Hurrah!

These were our tried and tested plans for flying with a toddler. We took Freddie’s brother on a plane at 9 months old and again at 17 months old so we have a little experience. This is what worked for us and hopefully it will help you too!

Mums Weekend off in the Lake District

Northern Lights with the family // On our World Travel Bucket List

Why You Should Take Your Family to Australia

Shop ’til you drop in Liverpool this Christmas

Travel plans to consider for 2020